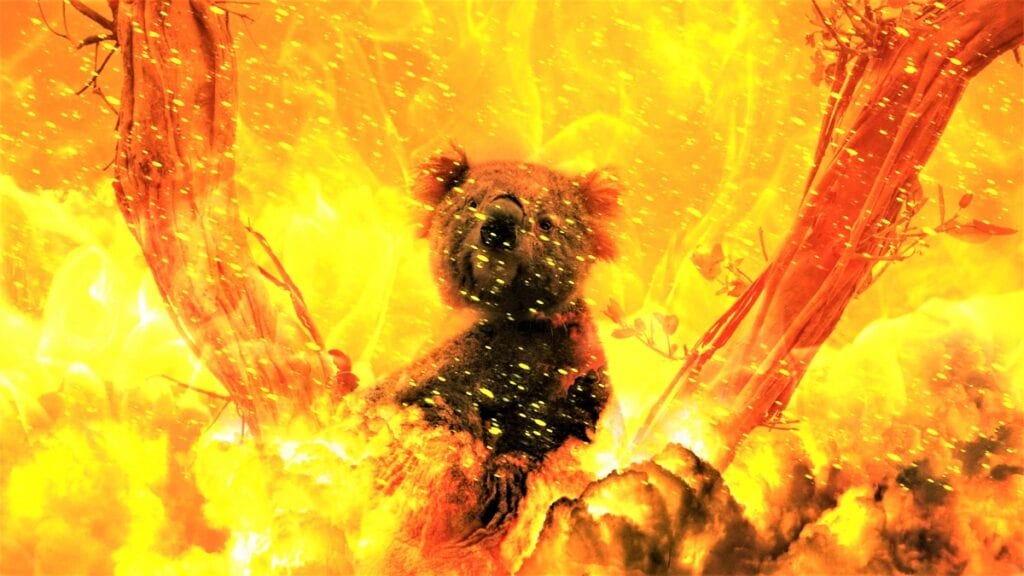 The Year When Normal Became Extinct

In a momentous twist that is truly on brand for 2020, the Atlantic Ocean recently broke its record for the all-time busiest hurricane season. This came as a new subtropical storm formed over the Atlantic basin, earning the name “Theta.”

In case you’ve forgotten, the start of 2020 found Australia in the super-heated haze of its worst bushfire season – following the continent’s hottest year on record. The fires down under burned through more than 10 million hectares, killed at least 34 people, and razed entire communities to the ground.

More than a billion native animals died in the conflagrations – which were historic in the saddest way possible: scientists say some species and ecosystems may never recover.

But no, we all know the world didn’t end there. Because people were again routinely invoking the notion of the apocalypse nine months later, when wildfires roared through the US West Coast.

“I drove six hundred miles up and down the state, and I never escaped the smoke,” Senator Jeff Merkley of Oregon said of the fires in September.

Plumes of smoke from the fires were so large, they crossed the Atlantic Ocean, and – carried by the jet stream – reached the skies over Europe.

Of course, the world didn’t end with those fires, either.

When We Forgot the Meaning of Normal

After a year of coronavirus, droughts, rampant wildfires, hurricanes, and searing heat waves that set all-time records across Europe, most have come to accept an unsettling fact.

In the face of a threat as complicated as climate change, it’s tempting to talk of a final end. The apocalypse would mean a conclusion to the terrifying and the unpredictable – an exemption from a future world of hurt.

Yet the pandemic, fires, and hurricanes of 2020 are not the end of the world – or even, for most of us, the end of our world. In a year that has forgotten the meaning of normality, the calamitous turns of 2020 only serve to emphasize the new normal.

Over the past few decades, greenhouse gases (GHGs) have increased at extraordinary rates as a result of economic growth and resource consumption. And, according to scientists, the yearly penalties for our continuing assault on the environment are bound to get worse.

The graphic below – from Our World in Data – compiles the most recent information from 2016 courtesy of Climate Watch and the World Resources Institute. That year, total emissions reached 49.4 billion tons of CO₂ equivalents (CO₂e).

Four years later, the consequences appear to have come to a spectacular crescendo.

Where is it all coming from? What is stoking catastrophe like a stick in a hornet’s nest? Researchers have traced global GHG emissions back to sectors under four broad categories: energy, agriculture, industry, and waste.

More specifically, they found that nearly three-quarters of GHG emissions come from our energy consumption. Billions of people rely on petrol and diesel-powered vehicles to get around.

The consumption of these fuels contributes to almost 12 percent of global emissions.

But this particular challenge is also an opportunity. The consumer adoption of electric vehicles (EVs) could help shift the world away from fossil fuel use, both for passenger travel and for freight. That won’t be easy – but it can be done.

Meanwhile, buildings contribute 17.5 percent of energy-related emissions overall. That’s mostly because cities use anywhere between 60 to 80 percent of the world’s annual energy needs.

With megacities – those that are home to 10 million people or more – expanding every day to accommodate a growing population, these shares may rise even further.

The second largest contributor is the sector and industry which supplies humanity its food. In agriculture, methane from livestock contribute the most to emissions, at 5.8 percent of the total.

The livestock sector likewise leaves behind some of the highest carbon footprints, from farm to table.

Just how much land we are using to raise food is an equally important consideration. Researchers have long established a clear correlation between land use and rising global emissions.

There is still some good news, believe it or not. While many of the old energy systems are still well-entrenched, the global energy mix is ready for change.

Exactly where we need to make that change has become increasingly clear as the world moves towards a green energy revolution. But just how much can we accomplish after decades of delayed action?

In its most recent annual report, the International Energy Agency (IEA) has taken a detailed look at what it may take for the world to achieve “net zero” emissions by 2050.

Net zero means that any emissions remaining at that point would need to be offset with carbon removal efforts such as tree planting.

The scenario is stark, demanding “unparalleled changes across all parts of the energy sector,” the research agency found. The radical overhauls would have to begin right now, too.

In the next decade, the world would need to:

The IEA’s net-zero scenario entails major changes in personal behavior, as well. These include replacing all flights of an hour or less with low-emissions options – like hydrogen trains or buses.

If you need to take a trip that’s under three kilometers, then you’d have to walk or ride a bike.

Even achieving net zero emissions by 2070 – which would keep warming to around 2 ˚C – would require sweeping changes and aggressive public policies, the IEA finds.

In the next decade, coal demand would still need to decrease by nearly 40 percent and solar capacity would have to more than triple. Clean energy vehicles would need to exceed 40 percent of all new sales, too.

But it can still be done, if we put our heads together and work toward a common objective.

Australia managed to survive the summer of 20/21 without any catastrophic infernos… but North America is now in the grip of record-breaking heat and it’s own set of devastating fires.

Across the North Pacific Ocean, Siberia is also burning – and melting. Forest fires there have already destroyed more than 1.5 million hectares (3.75 million acres). The permafrost has been warming for decades but is now doing so at an accelerated rate.