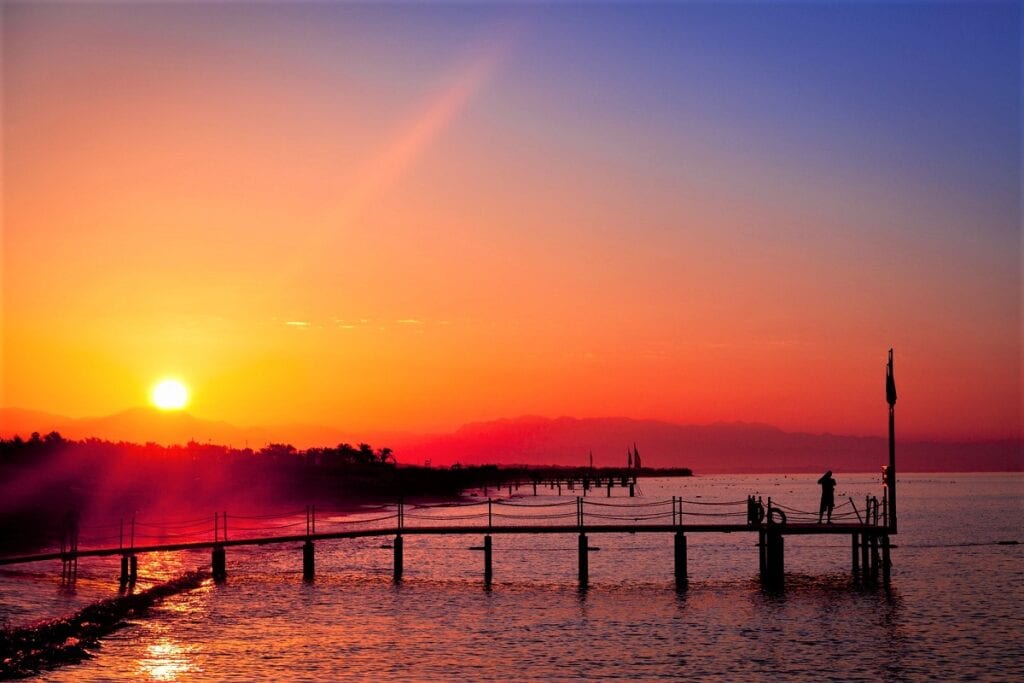 The Best Sunrise Clocks to Start Your Day

What woke you this morning?

For thousands of years, there was only the early morning trill of birds. If the birds didn’t wake you, people did. Your spouse, children, or maybe someone else roused you from bed to do your job. All of that changed when the alarm clock went into mass production in the 1870s.

Now it’s the first thing most of us touch – or smack – when we wake in the morning. Sleep researchers have found that 85 percent of people use an alarm clock to wake for work.

The problem is that standard alarm clocks – and even smartphones – often mean a rude awakening. And they don’t always do the job.

Some 57 percent of the people who wake to alarms are “snoozers.” They’ll hit the button at least once to stay in bed a few minutes longer.

But even snoozing doesn’t always help. Half of all people who use alarm clocks admit to having thought of smashing the contraptions. Many of the irate newly-awakened are “snoozers.”

If your bedroom doesn’t have a window, or you use blackout curtains, then a sunrise alarm could make waking easier.

What is a Sunrise Alarm Clock?

A sunrise alarm clock is an artificial light source that’s integrated into a standard digital clock. These alarm clocks will gradually wake you at a pre-selected time. It does this by simulating the increasing light of sunrise, often over 30 to 40 minutes.

The simulators may have a full-spectrum white or yellow LED lightbulb. The light’s color spectrum, or color temperature, varies from one model to the next. Most are less intense than those of a standard lightbox.

Below are six of the best sunrise alarm clocks available to consumers right now.

The Best of the Best

If there’s one thing that’s immediately apparent about the Homelabs Sunrise Alarm Clock, it’s the excellent build quality. The device boasts a solid metal stand and touch-sensitive buttons. It’s simple to use, and the light on the sunset setting is warm and soothing.

The artificial sunrise should be enough to wake you, but it isn’t too bright. The clock also offers nature sounds, like birds and ocean waves, to help ease you awake.

This Homelabs’ alarm can shine enough light when it’s the only lamp in a dark bedroom. But it’s small, and its light is not as diffused as those of the more expensive alarms on this list.

You can read in the light before bed, but the device doesn’t quite drench the whole room in brightness. Still, it is bright enough to wake you in the morning. You can dim or turn off the LED display, which can be a useful feature for some.

The Homelabs Sunrise Alarm Clock is well-worth its $20 price tag. The alarm’s other features – like multicolor mood lighting and an FM radio – are a wonderful addition to the package.

Many sunrise alarms use white light to wake you. That can be exasperating in the early morning. Your eyes flutter open, you squeeze them shut, sit up, and rub your eyelids with your knuckles, quite blinded.

The Philips Wake-Up Light HF3520 starts with a more soothing red-tinted light. The reddish hue gradually shifts to a bright white after a few minutes.

The Philips HF3520’s build quality is the best in this guide. The device has the usual features, such as an audible alarm, five natural wake-up sounds, and an FM radio.

The HF3520 offers neither an app to program the settings nor relaxation sounds to help you sleep. But it has a good range of five-alarm sounds, a decent radio, and a backup alarm.

The system has a backup power source, too. This means the alarm will still function in the event of a power outage. We think that’s an excellent feature.

The lens is convex. Some light shines through the back of the casing. This allows the device to cast light in more directions than the Homelabs.  The light is diffused to keep the rays from being blinding.

That’s important in a dark room when your pupils are dilated and susceptible to harsh light. The clock display and touch controls are also much better than those of cheaper alarms.

This would be our first pick if it wasn’t so expensive. It’s five times the price of the Homelabs. Good as it is, we don’t think the HF3520 beats the competition by as much.

Still, we’d recommend the Philips H3520 if you have a large bedroom and want some light for reading in bed. The device is quite handsome, too.

The Easiest to Use

In addition to its line of mattresses, Casper offers the Casper Glow Light, an adjustable sunrise alarm with one-touch controls. The Glow emits a warm yellow light with a warm white LED and amber LED accents. But that’s it. You can adjust the brightness but you cannot make the light warmer or cooler.

To start the sunset program before bed, just flip the alarm over. You can set wake-up schedules and adjust the length of the sunsets and sunrises in 15-minute increments through the app.

There’s a button on top to pause and release the alarm. This sunlight simulator recharges on a pad the size of a coaster. When it’s on the pad, you need only to turn the Glow to adjust its brightness.

You can pair several together. They’ll synchronize so you can have one in each room in your home. The effect eases your entire apartment into sunset lighting as you approach bedtime.

Of all the simulators on this list, the Glow was the best at diffusing the light across a dark room. It’s also the only wireless model in the line-up.

But the Casper Glow’s price-point is higher-than-average. And for $130, it doesn’t have a clock, a radio, or an audible wake-up buzzer.

Still, the Casper Glow Light offers more functionality and customization than most competing models. That just might be a sufficient selling point for some.

The Philips SmartSleep Connected Sleep and Wake-up Light (HF3670/60) offers more than just simulated sunlight. You can program eight pleasant sounds to start softly and increase in volume as the light brightens.

If the need to wake on time is urgent, the Philips HF3670/60 can force you from bed with PowerWake. This is an extra loud alarm with bright flashing light!

The light quality is a bit better than those of the other premium alarms in this list. You can select from four light profiles. Would you prefer a “Caribbean red” sunrise over a “Nordic white” dawn? All you need to do is select the proper setting and you’ll have it.

Setting up the HF3670/60 was simple. When you plug it in, the device will prompt directions to download the Philips app on your phone. You can control the device through the touch-sensitive panels on the alarm’s face.

But the best way to operate its features is through the app. That said, we recommend that you forego the non-Wi-Fi model.

Having trouble sleeping? You can follow a guided breathing exercise through the light to relax before bed! The wake-up sounds aren’t tacky, too.

The only hitch here is the price. The Philips HF3670/60 commands a price just shy of $300. We don’t know about you, but these days that’s enough to keep us awake at night.

Just by looking at it, you can tell the engineers behind the iHome Zenergy were thinking about bedtime. The alarm clock looks like it belongs on a nightstand.

The cloth curves are sleek and elegant-looking. The clock face is hidden behind this exterior. The device looks durable, too. While we didn’t try, we suspect the Zenergy won’t break if you somehow knock it off the bedside table.

The controls arrayed on the top and rear of the clock look daunting. In fact, you might struggle to remember which one silences the alarm in the morning. The snooze button is relatively easy to find, though, being raised and prominent.

The same cannot be said of the alarm reset button. This switch is flush against the top of the clock and might be difficult to locate when you’re still half-asleep.

The Zenergy offers the most calming sounds before bed and when waking up in the morning. There are 16 excellent audio options in all, including Heartbeat and River. There’s also a voice that guides you through a breathing exercise over a soothing track in the background.

The see-through cloth cover allows the digital clock and menu items to shine through while hiding unlit display settings. The device also offers fun color patterns like Aurora, which is a rainbow design, and Pulse, a colored checkerboard effect.

But the Zenergy doesn’t light a room as well as other alarms. In that respect, it’s like a night light you can set before climbing into bed.

If it looks like it was created more than a decade ago, it’s because the Lumie Bodyclock Active 250 is the original wake-up light. The design is simple. With a bulb mounted high inside a three-sided lens, this device does a good job of diffusing the light.

The light is plastic. That means you have no worries about glass breaking. That said, the plastic doesn’t feel cheap because of its sleek design.

The Bodyclock has all the standard features of the sunrise alarm clock. There’s a loud alarm, a clock you can dim, and a reliable snooze button. You can also adjust the brightness and duration of sunsets and sunrises.

The alarm has different noise settings. You can get a cockerel crowing or birdsong at sunrise. You can also set the sounds to white noise, rolling waves, or a plain alarm beep.

The Lumie isn’t a bad piece of equipment but it’s expensive. We may well have paid the price it commands 10 years ago. Back then, the Bodyclock 250 would’ve been the only alarm of its kind in the market. But now it’s competing in a market that is full of newer designs and lower prices.

We all feel the ebb and flow of daily life, the daily cadences that guide our days. The most basic biological rhythm is the sleep-wake cycle, which is related to the cycle of the sun.

That’s precisely how sunrise alarm clocks work. They make us feel sleepy as the evening hours wear on, and wakeful as the day begins. And they do it more naturally than standard alarm clocks.

Does that help? Yes, it does, in our sleep-deprived opinion.

But don’t just take our word for it. Why not find out for yourself?