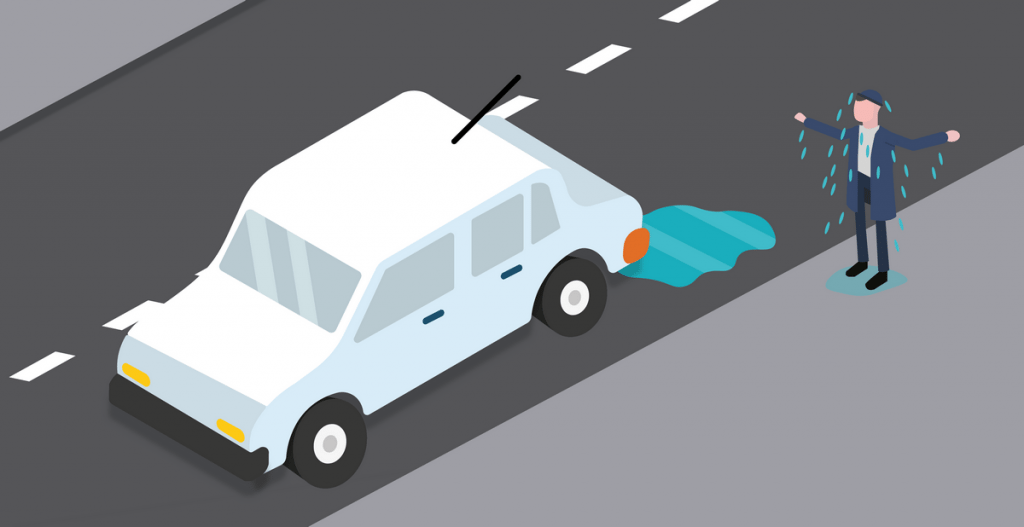 There are many bizarre driving laws around the world. If you think getting a speeding ticket for going 1mph over the limit is a bit ‘over the top’, you’re about to discover just how crazy driving legislation can get. While some of the following laws make sense, others seem completely absurd! Logical or not, if you like to get behind the wheel when you’re vacationing, it might be time to brush up on the local rules . Whether you enjoy your tipple or take your pet pooch everywhere, this is a must-read guide to ten of the weirdest international driving laws out there:

1. Japan: Splashing a pedestrian whilst driving past carries a fine

Most of us have had at least one day ruined after being soaked when an inconsiderate driver went through a puddle of rainwater. As if it wasn’t enough that our shoes were ruined and we had mud up our brand new jeans, we were left cold, wet and embarrassed. To top it off, the insane laughter emanating from the driver made sure we knew it was no accident! In Japan, though, the shoe is on the other foot, so to speak. A driver who splashes a pedestrian as they drive past is up for a fine.

Despite lots of grumbles, we humans have been obligated to wear seat-belts in our vehicles for decades. That law is estimated to have saved over 50,000 lives in the UK alone since the legislation was introduced in the early 1980s.

Many nationalities are well known for their love of animals, particularly their dogs. UK households alone are home to over 6.5 million pooch pals and in Australia, a staggering 39% of homes are shared with at least one dog!

In an earlier post we wrote about how the death of your dog can be as emotionally painful as losing your spouse. The emotional Italians must have read that post since it’s compulsory for your dog to wear a seat-belt too!  Given the very low cost of seat belts for dogs, why not do your pooch a favour right now?

3. Thailand: It’s illegal for anyone to drive topless

Thailand is a top tropical destination for holidaymakers from all over the world. They’re seeking sun, sea, sand and, yes, in some cases sex.  Maybe that’s why Pattaya is often called the world’s sex capital.  While the country is filled with culture, it is possibly better known for its exuberant nightlife.  Gap-year students flock to Thailand’s Full Moon Parties and the adventures that follow. With such an open attitude to sex, you might assume that Thailand has a lax approach to going topless. You’d be very wrong! It’s frowned upon to bare all on the beaches and it is illegal to drive topless, whether you’re male or female.

4.Germany: You can drive in the nude

If hearing about Thailand’s ban on topless driving has got you down, consider heading to Germany instead. While a lot of that sun, sand and gorgeous beaches may be missing, German law dictates that your car counts as ‘private space’. That means it’s completely legal to drive in the nude anytime you feel the need! Of course you may want to keep your shoes on since most auto insurers will not pay up if you’re driving bare-footed!

5. Russia: Keep your car clean or you’ll be fined!

Have a quick look on the Internet and you’ll find an abundance of YouTube videos showcasing Russia’s car crashes and road rage incidents. Because of this, you wouldn’t be alone in thinking that driving regulations are minimal in the world’s largest country. But believe it or not, it’s an offense drive a dirty car and you’ll be fined if the number plate is not legible. Probably best to avoid any excuse to get pulled over though, so make sure you head to the car wash on a regular basis.

6. Spain: Spectacle-wearing drivers must carry a spare pair of glasses

If you wear glasses or contact lenses, chances are you always wear them whilst driving. After all, apart from the legal necessity, you want to be able to see properly for the safety of yourself and your passengers. However, you probably don’t always carry a spare pair with you. Just think about all the times you’ve lost a contact lens or broken a pair of glasses. It makes sense that in Spain, it’s compulsory to have a spare pair of spectacles with you in the car.

7: Cyprus: Eating or drinking while driving incurs an instant fine

Haven’t we all chomped on a sandwich in the car driving between meetings or sipped on a drink stowed in the centre console during long drives? It seems harmless enough. But do it in Cyprus and you’ll face a fine. Simply remember to hydrate before your drive and always pull over if you need food or drink during your journey.

Many of us dread the night we’re the ‘designated driver’. We have a dry evening, watching our mates get plastered, then listen to them talk gibberish the whole way home. At least the role is appreciated and we take it in turns. We might be used to our drunken pal sitting next to us on the drive home, but if you’re the designated driver for a night out in Macedonia, make sure any drunk passengers are in the back seats. It’s an offence for anyone visibly under the influence to ride in the front. We wonder what happens if you only own a two seater?

9: Costa Rica: You can enjoy a beer while driving

In most countries these days, you wouldn’t dream of drinking and driving. You know the routine:  “Drinking and driving don’t go together”. Yet in Costa Rica, while it is still illegal to drive drunk, it not against the law to drink whilst driving! Yep, you can legally enjoy an ice-cold beer while you cruise the roads. Although this is undoubtedly a novelty, it’s still safest to limit your alcohol consumption to the bars.

In most countries, we only use our headlights at between dusk and dawn. It makes sense – you turn them on so that you can see and be seen by others when natural light is not at its fullest. In Sweden, headlights must always be on when you are driving. It’s been a mandatory requirement since 1977, so it doesn’t matter whether it’s a fine, bright day or not. If you do forget, other drivers are likely to flash you as a reminder. Although it may seem pointless, the use of 24-hour headlights is said to reduce collisions by five to ten per cent.

Do you know of any other quirky driving laws we can add to this list?