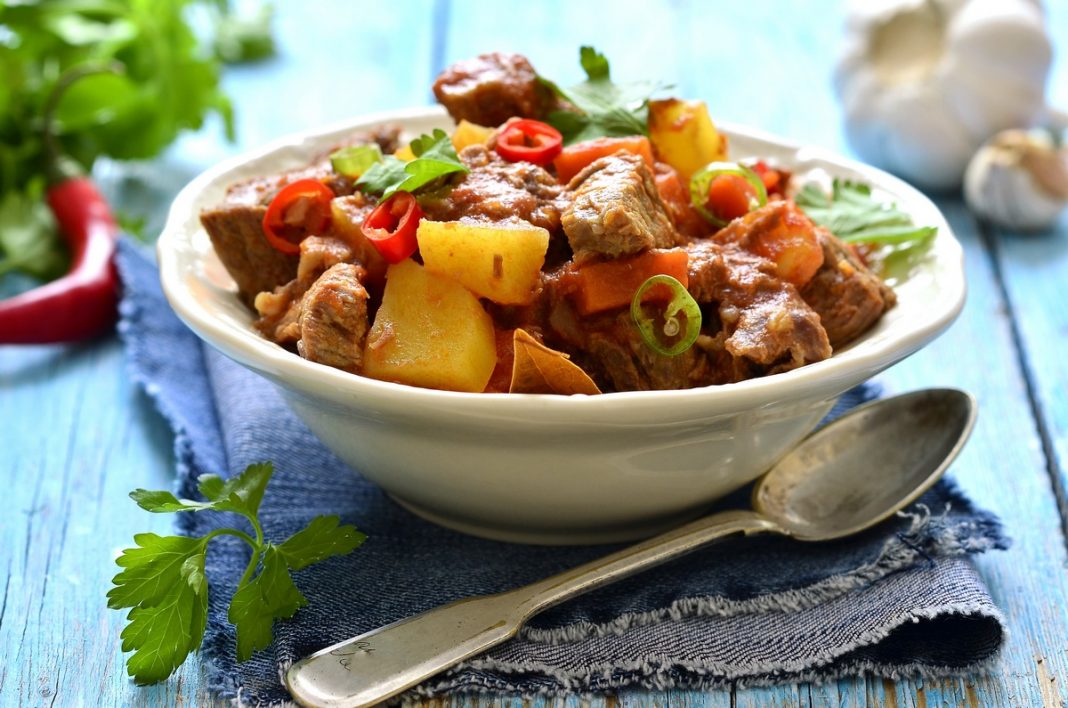 Braised beef and vegetables in a spicy tomato sauce

Amino acids are the basic building blocks of our body. And while they’re present in many foods, they’re highest and most readily absorbed in and from animal products, especially meat. I can already hear the vegetarians among us screaming (I live with three 🙂 ) but you can’t argue with science which is now showing that the high levels of certain amino acids in some foods can boost cardiovascular health in ways comparable to making major changes to your lifestyle.

Got that? You can eat your way to better cardiovascular health by upping your amino acid intake! In fact, according to the study conducted by researchers at the University of East Anglia in the UK, an increased intake of high quality, easily converted amino acids can be the equivalent of getting more exercise or even quitting smoking!

According to the project lead, Amy Jennings, “Results from previous studies have provided evidence that increased dietary protein may be associated with lower blood pressure. We wanted to know whether protein from animal sources or (protein from) plant-based sources was more beneficial – so we drilled down and looked at the different amino acids found in both meat and vegetables.”

The study investigated the way seven amino acids correlated with health changes. Tyrosine, leucine and glutamic acid are in highest concentrations in animal products while arginine, cysteine, glycine and histidineare are highest in some plant based foods.

Close to 2,000 women were included in the study, published in The Journal of Nutrition. The data came from TwinsUK, which is the largest UK adult twin registry. It’s used to study the genetic and environmental causes of age related disease.

The study concluded that those women who consumed the highest amounts of amino acids had lower blood pressure and less arterial stiffness. “The really surprising thing that we found is that amino acid intake has as much of an effect on blood pressure as established lifestyle risk factors such as salt intake, physical activity and alcohol consumption. For arterial stiffness, the association was similar to the magnitude of change previously associated with not smoking.”

The researchers found that amino acids from animal sources (glutamic acid, leucine, and tyrosine) were most strongly associated with lower levels of arterial stiffness and while increased intake of all seven amino acids result in lower blood pressure, they concluded that those from vegetables reduce blood pressure the most.

According to Amy, “Increasing intake from protein-rich foods such as meat, fish, dairy produce, beans, lentils, broccoli, and spinach could be an important and readily achievable way to reduce people’s risk of cardiovascular disease.”

But before you get too excited and run out to get that 500 gm fillet steak you’ve been craving, Amy suggested that, “Beneficial daily amounts equate to a 75 g portion of steak, a 100 g salmon fillet or a 500 ml glass of skimmed milk.” She didn’t mention how much spinach you’re allowed 🙂

You can find the full report here and, if the feature photo is making you feel hungry, you’ll find the easy to cook recipe here…

Diatom Art – nature under the microscope