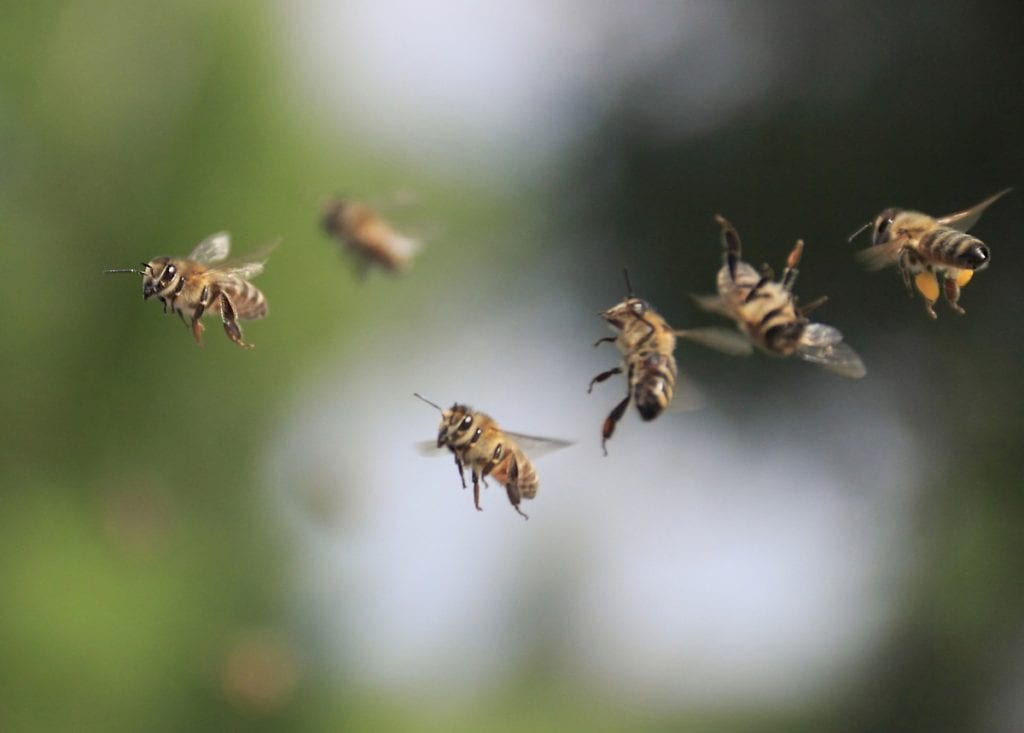 In late August last year, a runaway swarm of 30,000 honeybees descended on the umbrella of a hotdog cart at Forty-Third Street and Broadway, in New York City. It was an event that caused crowds of famously indifferent New York City pedestrians to stop and gawk in incredulity.

Q: “How does something like this happen???” A: “Just like us, they’re only looking for a place to cool down.”

Hundreds of curious onlookers began to gather. Those who wandered too close were soon scrambling as the bees took wing to buzz them away.

Within an hour, the NYPD had cordoned off the entire intersection.

Bad jokes began to fly around, as well. “Bee good,” one police officer warned reporters who came too close to the swarm.

Not long after, an NYPD officer in a beekeeping veil emerged to carefully suck up the bees with a special low-power vacuum.

With the bees gone, the crowds gradually dispersed, uncharacteristically fazed. It was as if Elvis had left the building without an encore.

Bees have fascinated people from all walks of life throughout history. The people of ancient Egypt associated them with royalty. The ancient Romans catapulted scores of beehives into the fortresses of their enemies to sow chaos.

Researchers have known for years that insects are capable of learning and performing complex tasks.

Studies show that insects can understand what zero means. They can also solve simple addition and subtraction problems.

In his book, Honeybee Democracy, the animal behaviorist Thomas Seeley says honeybees even engage in collective fact-finding, vigorous debate, and consensus-building when seeking a new home.

More recently, researchers from Australia and France have found that bees can perform numerical tasks even better with proper training.

In an experiment, the researchers trained honeybees to enter a Y-shaped maze. Once inside the maze, the bees had to distinguish between a card with four shapes and another one with eight, seven, six, or five shapes.

When the bees correctly selected the card with four shapes, the researchers rewarded them with a sip of sweet sugary water.

For purposes of testing, the researchers gave half the bees a penalty for mistakes. They gave that half a taste of bitter quinine-flavored water when they picked the wrong cards.

The results of the experiment, published recently in the Journal of Experimental Biology, indicate that the success of the bees came down to training.

Bees trained with the rewards and penalties system performed much better than bees trained on reward alone.

“It shows us definitively that changing the training regime with the bees … really impacts their performance on tasks,” says Scarlett Howard, lead author of the study.

“The Simplest and Fastest Strategy”

The study raises the possibility that bees – and perhaps even other animals – can count to higher numbers than was previously thought.

That is at least according to sensory and behavior ecologist Lars Chittka of the Queen Mary University of London.

Chittka, who was not involved in the study, says we may underestimate the intelligence of many animals if they are inadequately trained.

The German scientist compares the “reward only” system to giving school kids a multiple-choice exam where they get no penalties for ticking false statements.

“In that case, a clever kid would not even read the statements, but tick everything as correct,” Chittka says. “That would be the simplest and fastest strategy.”

Howard is meanwhile surprised that the bees that received only rewards were unable to distinguish between the cards with four and eight shapes.

Many other animals are able to distinguish between cards showing a relatively simple ratio of one to two.

But she was also surprised that the bees trained with rewards and penalties were able to distinguish between the cards with four and five items. This is an extremely difficult comparison for them to make.

Howard suggests that avoiding a sip of the bitter water could increase the motivation of the bees to choose more accurately.

“It’s almost like they’re thinking of the consequences of their actions,” Howard says.

“Everything it Needs to Live”

No one ever claimed the bees that swarmed the hotdog stand in Times Square last year. That means it’s up to the NYPD bee squad to care for them.

Officer Michael Lauriano, the NYPD police officer who responded to the call with the vacuum, took the bees back to his home on Long Island. There were no bee casualties during their removal from the hotdog stand.

Lauriano is a bee enthusiast and the swarm is now part of his backyard apiary. The bees are doing “fantastic,” says the police officer.

“The whole hive has basically everything it needs to live on its own,” says Lauriano of the bees in their new home. “I’m just kind of the landlord. And, of course, they produce honey, and I take some for myself as the rent.”

The bees don’t seem to mind. They’ve probably done the math and decided they have a good deal going with the officer who rescued them.

PrevPrevious PostToo much water in your wash cycle is damaging your clothes. Here’s why…
NextWhat You Should Know About Sleep LossNext