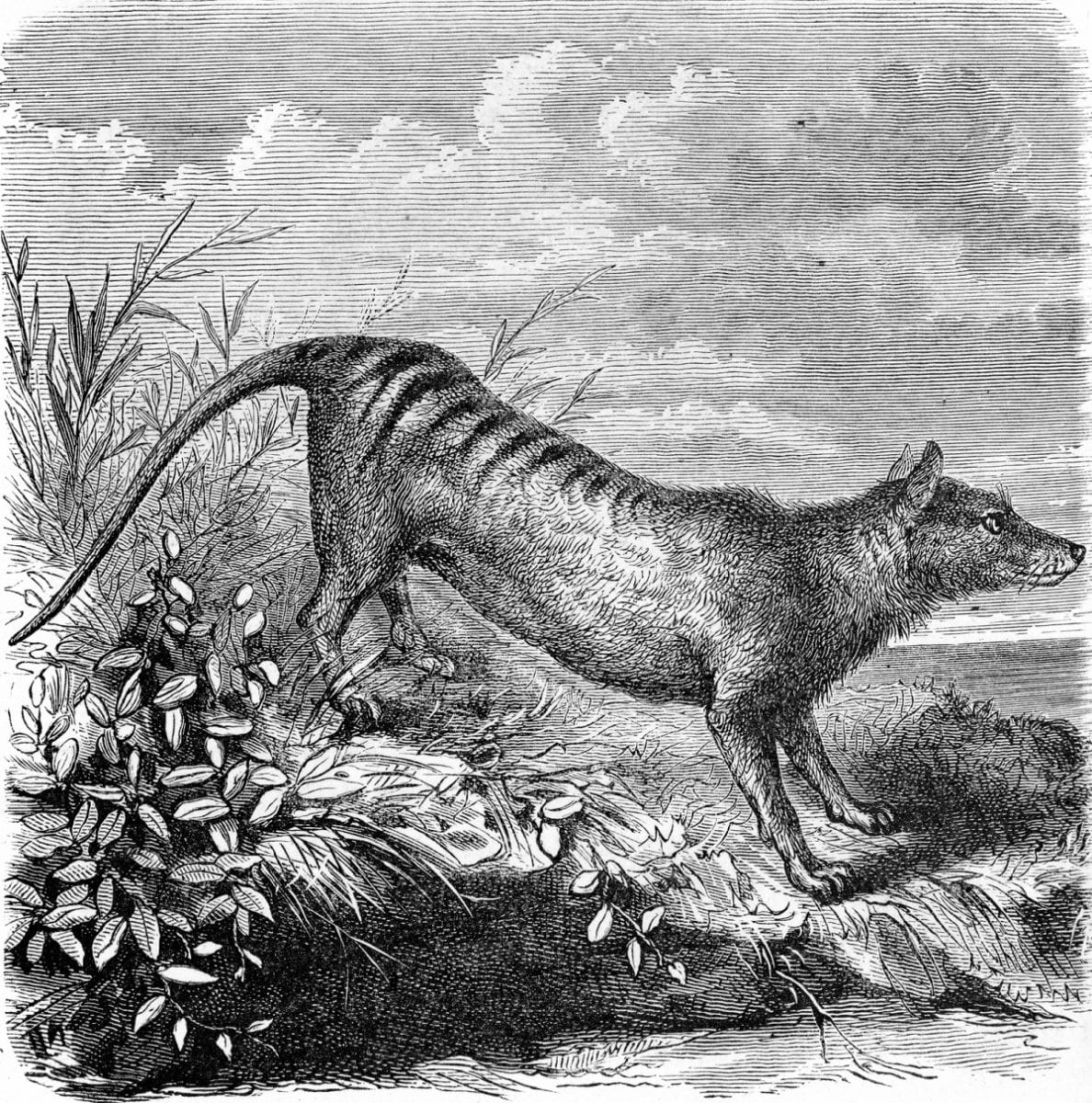 The last known footage of the animal – shot in grainy, hauntingly silent black and white – captures a docile-looking creature pacing around a sunlit concrete enclosure.  With its seemingly tractable mien, slender body, and rather goofy-looking bobbing head, the animal might not look like a predator at first glance. But that is only until it yawns to reveal its teeth.

The Tasmanian tiger, or thylacine, was the only member of its genus of marsupial carnivores to live into modern times. The animal could grow to six feet long, if you counted its tail.

Like the great auk, the passenger pigeon, and the dodo, the tiger’s story is heart-rending. Once plentiful across Tasmania, the animal was branded a sheep killer by colonists in the 1830s and hunted to extinction.

A homesteader named Wilf Batty shot the last known wild specimen through the shoulder in May1930. Batty caught the animal killing chickens in his hen house in Mawbanna, in northwest Tasmania.

The last tiger in captivity, Benjamin, died in 1936, at a zoo in Tasmania’s capital, Hobart. The animal died of exposure after being locked out of his shelter on a cold night.

The Hobart city council noted the death a week later and authorized the release of thirty pounds to fund the purchase of a replacement. None ever came.

The world could have moved on, ticking another species off the list of the planet’s surviving creatures – as it has for the extinction of countless other animals. But, over the years, something strange happened.

In extinction, the Tasmanian tiger seems to have undertaken the fantastic journey from oblivion into the unlikely world of immortality.

Long after the accepted date of extinction, people have reported that they’ve seen Tasmanian tigers in the wild. Tasmanians have reported tigers darting across roads, bounding “like a dog with sore feet,” or else shadowing people walking in the bush. There are, by now, in fact, hundreds of officially recorded sightings. The records span decades. Many more sightings have remained unofficial.

Once, two separate carloads of people said that they’d got a close look at a tiger. The creature had apparently refused to budge from a spot in the middle of the road despite the approaching vehicles. The two cars eventually had to drive around the animal.

The eyewitness accounts have been so convincing that people have put up money for further proof.

In 1983, the American media mogul, Ted Turner, memorialized a yacht race by offering a hundred-thousand-dollar reward for evidence of the tiger’s existence. In 2005, a magazine offered 1.25 million Australian dollars for solid proof that the tiger is still around.

English Panthers and the Giants of Patagonia

Kingdom Animalia is of course a-prowl with such tantalizing propositions. By certain accounts, our planet is still full of mysterious and unverified animals living in unexpected places.

Bigfoot strings up bridges of vine and timber across gorges in America’s Pacific Northwest. Some even claim that the seafaring explorer, Ferdinand Magellan, and his musketeers caught a family of them coming down the coast of Patagonia, in 1520.

The kidnapped creatures were tall and huge, recounts the Italian scholar, Antonio Pigafetta, who joined the Magellan expedition. Despite the crew’s efforts, the enormous creatures – twice the size of men – would eat nothing. Instead, they moaned hideously for the smoking mountains they were leaving.

Today, monster sightings are common and well-recorded. A giant dinosaur-like creature swims the deep waters of Loch Ness, in the Scottish Highlands. Many insist that black panthers roam the English countryside. Panther reports are also common across southern Australia.

Can the rumors of living Tasmanian tigers really be any different?

Throughout Australia, the dire extinction rate is expected to worsen – especially with the current bush fires raging through the country.  (More than a billion animals have already perished – from kangaroos down to koalas and lizards.) The country had already lost more than 90 percent of its larger terrestrial vertebrates by around 40 thousand years ago. The kangaroo and the thylacine were the notable exceptions.

A 2010 paper examining this issue showed that humans were likely to be one of the major factors in the extinction of many species in Australia. Climate change and bush fires played facilitating roles.

In a world beset on all sides by the devastating consequences of human activity, it may be for guilt or some wistful longing that we have helped evolve the more improbable beings of modern creature folklore. Outside, barely visible through the mist, when some shadow surprises us at midnight, perhaps we hope that long-gone creatures and landscapes still bide their time somewhere beyond our reach.

One might even venture so far as to suggest that the measure of this hope is hinted by the groans of relief whenever some blogger posts a video of some supposedly extinct – or entirely non-existent – creature in the wild.

In January 2019, a farmer captured a picture of a “funny-looking” animal near Clifton Springs, Victoria, Australia. In practically no time, countless denizens of the World Wide Web had all but triumphantly taken the photo as definitive proof that the Tasmanian tiger is still around.

How many of us really believe this? Clearly, contemplating the possibility of the thylacine’s survival seems to make the world bigger, wilder, more resilient and unpredictable: still capable of startling us into childlike awe. At the same time, it makes our mistakes seem smaller and less egregious.

Sure, it is always wise to keep an open mind. Tasmania and the Australian mainland are sprawling places to say the least.

But then one must likewise be open to the possibility that extinction is final – and that there is no coming back from it.

After all, it’s a bit too convenient – too tempting – to believe the tiger is still alive. Because to say otherwise is to confront the remorse that must come with the terrible extent of our own destructive power.