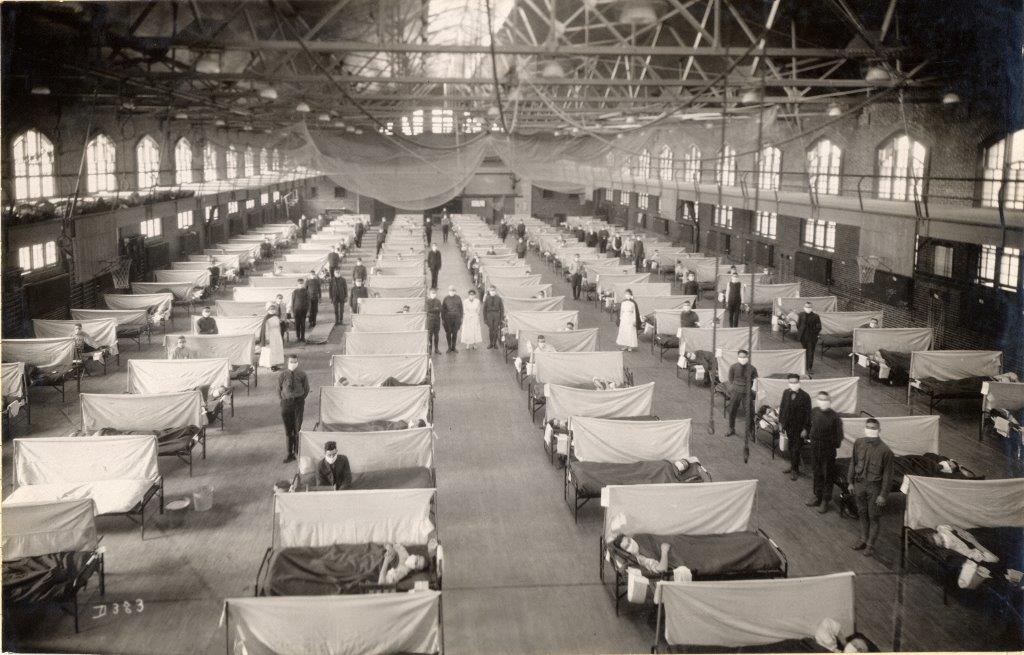 The Spanish Flu has been the pandemic ‘benchmark’ every since. Ebola and HIV fade into insignificance. But for many years now, public health experts have called for preparations for another “big one.”

Is coronavirus COVID-19 the ‘big one’?

Nobody knows if the novel coronavirus will be the big one that so many experts have been dreading. Some hold out hope that it will fizzle out.

Be that is it may, there have been those who have actively distorted facts surrounding the virus for purely political or mercenary purposes.

Truth: “The Most Important Lesson”

In 2017, approaching the hundredth anniversary of the Spanish-flu pandemic, the historian, John M. Barry wrote that “the most important lesson from 1918 is to tell the truth.”

The Spanish flu epidemic happened to strike at a tense moment in global politics and propaganda.

Wilson established the Committee on Public Information to spearhead the publicity effort.

The committee’s chairman, George Creel, then set out to promote what he said was propaganda in the “true sense” of the word – meaning “the propagation of faith.”

Wilson also signed the Sedition Act, which criminalized “disloyal, profane, scurrilous, or abusive language about the form of government” or anything else against the American war effort.

The US government put up posters around the country urging citizens to report anyone “who spreads pessimistic stories.”

In early 1918, Spanish flu infected a large number of men at Camp Funston, an Army base in Kansas. The killer disease spread rapidly to other bases.

As the virus quietly slipped into the civilian world, American public-health officials lied for the propaganda machine that Wilson had created.

A US Navy ship carried the virus to Philadelphia. Sailors started dying, but the city’s public-health director, Wilmer Krusen – a political appointee – dismissed the outbreak as “old-fashioned influenza or grip.”

As the death toll mounted, Krusen assured the public that the city was on track to “nip the epidemic in the bud.”

Some news organizations became Wilson’s allies in maintaining the subterfuge, helping to suppress information that could have otherwise saved lives.

One newspaper declared, “Scientific Nursing Halting Epidemic.” In fact, local hospitals were collapsing under the crush of new cases.

The week of that headline alone, more than 4,500 people in Philadelphia died of the flu. The smell of bodies left to rot in homes while they waited to be removed wafted over the streets.

In all, Spanish influenza claimed the lives of an estimated 40 million to 50 million people worldwide. Some say the death toll may have been as high as 100 million, making it one of the deadliest epidemics in human history.

“A Hoax” that Kills

This year, as news of the new coronavirus began to emerge worldwide, governments in numerous countries attempted to shape the truth to deflect criticism.

In China, after Li Wenliang, a doctor in Wuhan, drew attention to the new disease, police criticized him for spreading “rumors.” When the doctor died from the virus, the government clamped down on online posts demanding free speech.

Iran’s deputy health minister, Iraj Harirchi, recently went on Iranian television to downplay the risks posed by the virus to the Iranian population.

The deputy health minister coughed, cleared his throat incessantly, and wiped his brow with a towel on camera as he did. That evening, he learned that he had tested positive for the virus.

US President Donald Trump dismissed the threat at a rally in North Carolina. And, shortly after confirmation of the first coronavirus death in the US, he rejected criticism for using the word “hoax” in describing the outbreak.

“Low Ratings Fake News MSDNC (Comcast) & @CNN are doing everything possible to make the Caronavirus [sic] look as bad as possible, including panicking markets, if possible,”

“Low Ratings Fake News MSDNC (Comcast) & @CNN are doing everything possible to make the Caronavirus [sic] look as bad as possible, including panicking markets, if possible,” Trump said in a tweet. “Likewise their incompetent Do Nothing Democrat comrades are all talk, no action. USA in great shape!”

While he later walked back his “hoax” statement, Trump’s closest allies have gone on to amplify the same message. For instance, acting White House chief of staff Mick Mulvaney has accused the Trump administration’s critics of exaggerating the threat of the virus.

“The reason you’re seeing so much attention to it today is that they think this is going to be the thing that brings down the president,” Mulvaney told participants to the recent Conservative Political Action Conference in Maryland. “That’s what this is all about.”

Some scientists say they are worried that politicizing a growing outbreak could undermine the public’s trust in government responses to the disease. They could even prod skeptics into dismissing any real threats as Fake News.

Rush Limbaugh, the American radio host on whom Trump had bestowed the Presidential Medal of Freedom, has dismissed the disease as a Democratic talking point.

“I want to tell you the truth about the coronavirus,” Limbaugh said on his syndicated radio program recently.  “The coronavirus is the common cold.”

A very ignorant or politically motivated statement from Rush Limbaugh

A Test of Leadership

Throughout history, diseases have posed a merciless test of political leaders and their fidelity to the truth.

And throughout history, secrecy and misinformation have almost always impeded public health management, contributing to the further spread of a pandemic.

“We are in uncharted territory — we have never seen before a respiratory pathogen that is capable of community transmission, but at the same time which can also be contained with the right measures,”

Right now, Trump and other leaders like him are wrestling with an unfamiliar kind of problem.

This problem is utterly immune to a habit of disregarding facts. The germ is impervious to the powers of spin and cannot be bullied or threatened into submission.

You cannot make it go away by paying it off or scribbling with a Sharpie on a map. You cannot cure it with censorship or lies.

In fact, how governments and leaders perform against the virus that causes COVID-19 is likely to be a historic test of their capacity to function.

The virus has so far infected more than 82,000 people around the world.

Yesterday (March 2nd) it was announced that the coronavirus is spreading much more rapidly outside China than within the country, leading the world into uncharted territory

Regardless of political orientation, nationality, race, or religion, we should all hope that intelligent action and truth – nothing more and nothing less – prevail.

Light pollution is affecting your health!