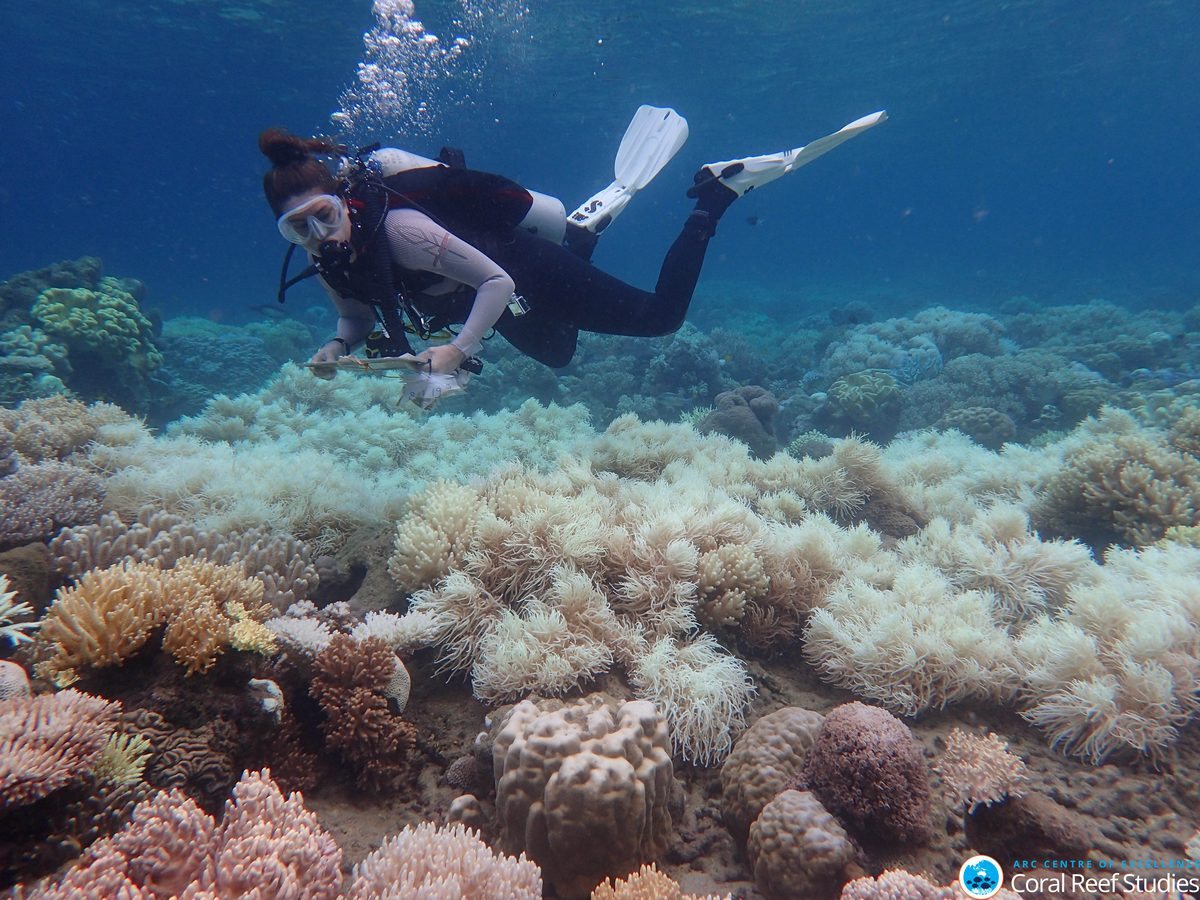 The Centre for World University Rankings recently rated James Cook University as the world’s # 1 research centre for Marine and Freshwater biology research. That suggests to me that we should ‘listen up’ when the university’s researchers tell us the Great Barrier Reef – comprising some 2,900 individual reefs, 900 islands and stretching over 2,900 kilometres – is very close to ecological collapse.

For the second time in just 12 months, scientists have recorded severe coral bleaching across huge tracts of the Great Barrier Reef.  Coral gets its colour from tiny photosynthetic algae, called ‘zooxanthellae’ that form a symbiotic relationship with the coral polyps. Bleaching occurs when abnormal environmental conditions, particularly increased sea temperatures, cause the corals to expel the zooxanthellae.

To judge the extent and severity of the bleaching events, aerial surveys were conducted along the entire length of the reef. The aerial survey techniques used were consistent with those used when surveying all four recorded bleaching events on the Great Barrier Reef that occurred in 1998, 2002, 2016 and 2017.

A 1,500 kilometre trail of destruction
In 2016, the bleaching event hit the northern third of the Reef hardest although damage occurred over the entire length. This year, it is the middle third that has been most affected.

“The combined impact of this back-to-back bleaching stretches for 1,500 km (900 miles), leaving only the southern third unscathed,” says Prof. Terry Hughes, Director of the ARC Centre of Excellence for Coral Reef Studies, who conducted the aerial surveys in both 2016 and 2017.

“The bleaching is caused by record-breaking temperatures driven by global warming. This year, 2017, we are seeing mass bleaching, even without the assistance of El Niño conditions.”

The reef can recover but…
Given sufficient time and the right conditions, including cooler water temperatures, bleached corals can recover as zooxanthellae recolonise them. If recolonization doesn’t occur, the coral will eventually die. According to Dr. James Kerry, who also undertook the aerial surveys, “It takes at least a decade for a full recovery of even the fastest growing corals, so mass bleaching events 12 months apart offers zero prospect of recovery for reefs that were damaged in 2016.”

Further coral damage occurred in late March when Tropical Cyclone Debbie swept through a 100 kilometre wide corridor of previously undamaged coral! The intense rainfall has also dumped millions of tonnes of fertilizer enriched topsoil into rivers and bays that will add to the current stresses on the reef.

“Clearly the reef is struggling with multiple impacts,” explains Prof. Hughes. “Without a doubt the most pressing of these is global warming. As temperatures continue to rise the corals will experience more and more of these events:  1°C of warming so far has already caused four events in the past 19 years. Ultimately, we need to cut carbon emissions, and the window to do so is rapidly closing.”

It’s about Kim Jong-un and that bomb!