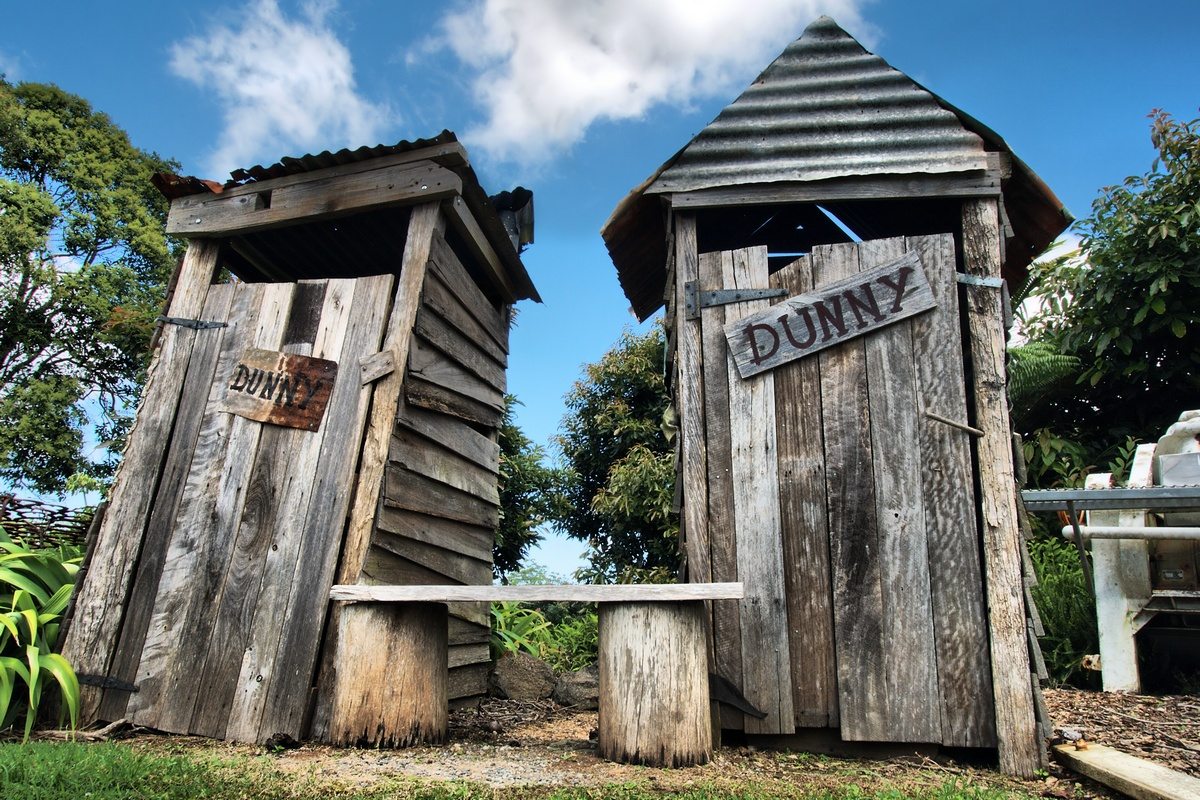 Who remembers the thunder box at the rear of the back yard — quite an amble or was it a cheek squeezing, knees together quickstep? One way or another, we all made it to the solitary, one only—never two–excrement collection point. Wonder of wonders, add it as the eighth. Families were larger in the little-house-out-the-back’s heyday: five a minimum, seven hardly noteworthy. All sharing the one dunny! How times have changed! Nowadays, a new residence has a good chance of having more dunnies than residents!

My first dunny was on a dairy farm where the home and cow’s night paddock were one and the same. A classic six foot by four foot chamfer boarded building on short stumps  nestled in amongst a grove of pepperina trees.  A night trip was around the veranda, down a full flight of stairs, a short walk across the paddock, hoping you missed any sloppy cow pads, then into the monster filled, never lit interior, abundant with spider webs. Imaginary monsters are fairies compared to bumping, on a moonless night, into a dark AIS cow whose startled rise instantly rids one of the reason to continue.

In ‘The City in History’, author Lewis Mumford observed that the fall of the Roman Empire was preceded by a mounting obsession with bathrooms and bath culture. Mumford suggested dire parallels with the United States of America—and that was in 1961! What are archaeologists going to conclude on an excavation of our civilization [civilization is not on: our sophistication] in a few millennia? Inhabitants of the era had the trots so ferociously that purge-the-poo colonoscopy drugs would be deemed to be compaction agents by future researchers. Or, that constipation was ubiquitous, and on discovering the phrase “s….t a brick” understood the inordinate time on the throne and the reason for the skillful brick collection system.

Dunnies are expensive and supremely mono-functional, so why the unnecessary repetition in dwellings: it’s a Real Estate Agent con feeding herd mentality with the delectable idiot pill…

“An en-suite to every bedroom, that’s what the market wants — mate!”

“Gotta have one at the living level, pal!”
“But, I have three upstairs!”
“Won’t sell in today’s market, buddy”

“Digger, if you had one at the garage level, I can assure you these homes would sell like hot cakes.”
“Wouldn’t a work bench be better?”
“You’re dreaming pal; nobody makes anything anymore. Forget it.”

It’s about the space

Dunny multiplication removes space —it’s not free. Bed, living, dining rooms are shrunk in anything other than grand residences. The extra space could be used for art, sewing, a work space or a better kitchen. Try those activities in the can; or is it the choice of multiple excreting venues that uplifts your life?

Repeating the unnecessary at the greatest cost per square metre ensures the most money possible to be unavailable for better uses. One less loo would pay for a suite of photovoltaic solar panels  perpetually guaranteeing lower electricity bills. Get rid of another and a large water tank would forever reduce the water bill. Builders in Queensland (where I do most of my work) whinged about the extra cost to add water tanks to residences and the Government rolled over and foolishly agreed, abolishing the regulation; but never a boo about the silly cost of multiple dunnies. It just shows where community values are.

It gets worse. En-suites!

As indulgent as they are, they now must come with his and hers basins. Huh? Can’t spit in her basin? Why? If you’re that desperate there is the laundry tub, two w.c’s, the kitchen sink, the other basin, the bath, the shower or even, heaven forbid, a plastic bucket.

Hark, I hear the spruiking agent, “Must have two or won’t sell; Essential”

One client summed it up brilliantly when she said, “The last thing I want is another basin and he’s there pulling the hairs out of his nose and ears. Totally puts me off my face.”

More money, more waste, no money left for higher ceilings, no adjustable sun control devices, no windows that work properly [sliding glass doesn’t: it’s just the cheapest], less insulation; but, must! must! must! have those double basins. More taps to leak, more waste pipes to block up, and more floor penetrations to lower ceilings in the rooms under — it’s just sophisticated stupidity.

Why clean the skid marks off three crappers instead of one? Sycophantic conformity is the answer.

Stop euphemizing these excrement/urination spaces. The first dunny must only be called an ‘excrement station’ , the second dunny must be called ‘cr..p house’ and a third dunny must be labelled ‘s..t house — nothing else should be allowed on plans or promotional literature. I believe this is essential ever since they started calling the thunder box on the living level a ”powder room”— to powder what? When was the last time you actually saw a woman powder anything other than a baby’s bum?

Secondly, religions successfully proselytized by taxing those of other than the dominant persuasion. They gained so many converts they acquired exchequer income problems. Let’s do the same with dunnies and multiple bathrooms: no tax for the first and then exponential taxes for each additional one. Surely nothing is fairer than indulgence taxes, eh?

Finally all dunnies should be composting toilets in this “environmentally enlightened age”. Yes, even in high-rise buildings.  The technology exists but our prudishness gets in the way of commonsense!

I’ll stop now. The sophisticates are aghast. The poophobics are in a dilemma as to which throne to choose. Better hurry!

Born in 1947, Russell Hall practices from his office in Moorooka, a Brisbane suburb. Never one to shy away from controversy, he laments the way most modern home designs totally ignore climate, topography and aspect. His best known design is the Carpenter-Hall House in Wilston which has been recognized by the Australian Institute of Architects as being of national significance.

The Royal Australian Institute of Architects also awarded Russell’s Judge Residence, Camp Island, Australian House of the Year as well as numerous citations for other residential & commercial buildings, Innovation in Architecture Awards for lighting and furniture and the John Herbert Award for Heritage Conservation Works.

In addition to his architectural practice, Russell is the designer behind The Ripple Iron Curving Company which produces a range of light fixtures, furniture and shade structures. It’s also the home of the Ripple Iron Stubbie Cooler, which won the Memento Award for Most Innovative Product in 2001.