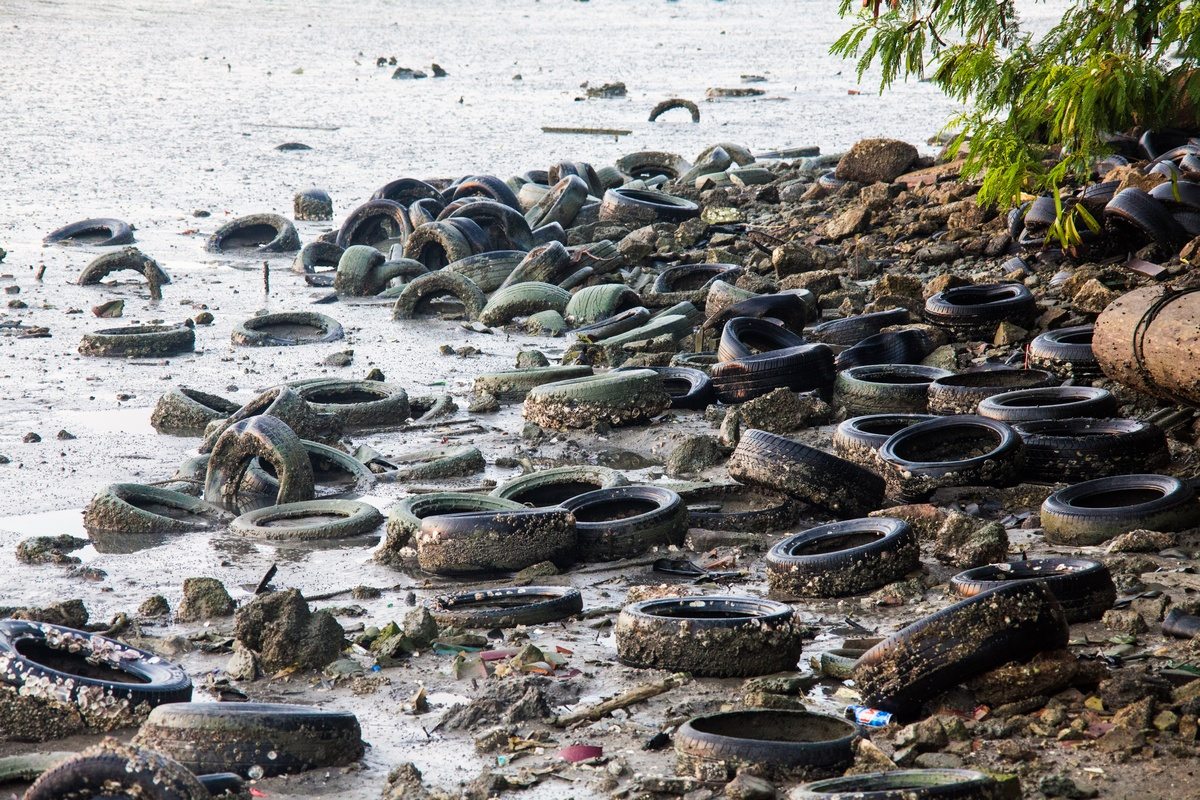 There are far more tyres than people!

In the 10 years to 2016, a total of 878.82 MILLION passenger cars and commercial vehicles were produced globally. Even if we assume that none had more than four tyres (most large trucks have at least 10 excluding the trailer) that’s well over 3.5 BILLION tyres. If we assume that each vehicle goes through just two sets of tyres in its life, we have a tyre for every man, woman and child alive today! If I include the spare that virtually every car carries, we’re approaching nine BILLION tyres and I haven’t added motorcycles!*

But wait… there’s more! Most of those tyres are still with us right now – in creeks and rivers, in landfill and backyards, in motor wreckers’ yards and in endlessly growing stockpiles that have enormous environmental impact when they catch fire. And they do, like this one in North Yorkshire three years back…

Or this one that happened just on a year ago, when the single largest tyre dump in Europe sent massive clouds of chemical laden smoke over large swathes of Spain.

Or this one in Melbourne, Australia when, in January 2016, some 150,000 tyres went up in smoke and particulates!

These stockpiles – many of which are illegal – exist for just one reason… it is very difficult (read expensive) to recycle tyres. In this article, originally posted on The Conversation, researcher Itziar Iraola Arregui addresses the enormity of the issue:

The number of vehicles is growing worldwide and as a result the number of tyres is increasing too. Hundreds of millions of tyres are discarded each year. Their disposal represents a major global problem.

There are serious hazards associated with stockpiling used tyres, such as uncontrollable fires. There is also the problem of illegal dumping, which results in pollutants and promotes growth of pests and insects. And burning tyres leads to the emission of harmful compounds.

Recycling tyres has been the main focus so far, but it is not enough to get rid of the massive number of waste tyres generated each year. There are alternatives, such as retreading, but they have major limitations. More eco-friendly recycling alternatives are now being explored.

But finding efficient recycling technologies for tyres is difficult because of their composition. Tyres are made of rubber, carbon black, steel and some additives. These are difficult to break down and separate, which makes reprocessing hugely challenging. Hence the need to develop new technologies.

One avenue being explored is valorisation – the processing (at industrial scale) of waste products and turning them into useful products or sources of energy. For example, raw materials such as rubber, carbon black or steel can be recovered from used tyres and used in other applications. It is also possible to extract energy in the form of combustible materials with high calorific value.

Recycling only goes so far

Materials recycling goes in several directions. These include civil engineering applications like road constructions, the manufacture of swings and shoe soles, and shoring up embankments.

For example, in Ethiopia and Indonesia indigenous people are producing shoes from waste tyres that will otherwise end up dumped. Thus, the landfills are less clogged and these enterprises are creating employment in disadvantaged communities.

Other alternatives, such as retreading, incinerating and reclaiming (obtaining rubber from old tyres by grinding and chemical treatments) all have major limitations. For example, incineration involves combustion, which releases hazardous emissions. Although with retreading almost 90% of the tyre can be reused, the safety issues and regulations for passenger vehicles’ tyres make it a non-profitable market. Reclaimed rubber, too, has limitations: the altered properties of reclaimed rubber make it unsuitable for use in tyres.

There are more promising eco-friendly ways to process used tyres. The most important ones are:

Devulcanisation involves breaking the bonds that hold the individual polymer chains together and create a network. There are different methods to breaking the bonds, including using chemicals or microwaves, and biological and ultrasonic methods.

During devulcanisation, rubber waste is converted into smaller fragments that can be mixed, processed and vulcanised again. Depending on the system chosen, in addition to rubber, other constituents can be recovered, such as oils, solvents and sulphur.

But the processes involved generate a host of problems and a great deal of research is being done to solve them. This includes finding ways to reduce the amount of chemicals used.

Grinding is focused on reducing the size of the waste tyre to a fine, crumb-like substance. These powder-like particles can then be blended and used as a filler in plastics. The process also allows for the steel and other fabrics to be separated. These can then be recycled too.

The downside to grinding is that the very high temperatures needed lead to the end-product being downgraded. This can be managed if temperatures are controlled. But this can only be done by using large quantities of liquid nitrogen that, in turn, increase the cost of the process.

Ground tyre rubber can be blended with all kinds of polymers (thermoplastics, thermosets and rubbers). There is a new trend focused on using these materials as sound absorbers.

Pyrolysis is proving to be a promising form of waste tyre recycling, with the production of potentially valuable products. It consists of “burning” the material at high temperatures in an atmosphere free of air to obtain a gas, an oil and a solid.

Pyrolysis products can be managed easily and separated for different applications. The gas fraction can be used in boilers to obtain energy. The most abundant fraction, the liquid, can be separated into expensive raw materials like the hydrocarbon limonene. The solid fraction (>80% carbon) may be used as activated carbon or carbon black.

Finding an efficient way of reusing and recycling used tyres will have a positive impact on the environment, as the recycling of a discarded material will avoid the use of new fossil fuel as coal or petroleum. For example, the oil obtained from pyrolysis can replace diesel fuel. This in turn will mean a reduction in greenhouse gas emissions.

More environmentally friendly processes have to become more economically and environmentally attractive, leading to the reduction of the large stockpiles of tyres and the creation of revenue.

* Motorcycle/scooter sales figures are very difficult to collate as there seems to be no central body or register. However, more than 6,775,000 were sold in just the USA during that same 10 year period. Ho Chi Minh City in Vietnam has 7.43 million registered motor cycles alone! Sales of scooters, motorcycles and mopeds in India exceeded 47 million in just the past six years. Domestic Chinese consumption would be at least similar. Globally, there are probably in excess of 250 million ‘two wheelers’ adding at least 500 million tyres to the pile.

Footnote:  Here in Australia, we pay a ‘disposal fee’ when we replace a tyre. That fee is to cover the environmental cost of burying that tire. How the figure is derived at is as much a mystery as how so many tyres still end up dumped in bushland or are piling up at illegal storage sites. Let’s all hope a viable solution is found ‘real soon now’!

Trees, the environment and the simple art of breathing…