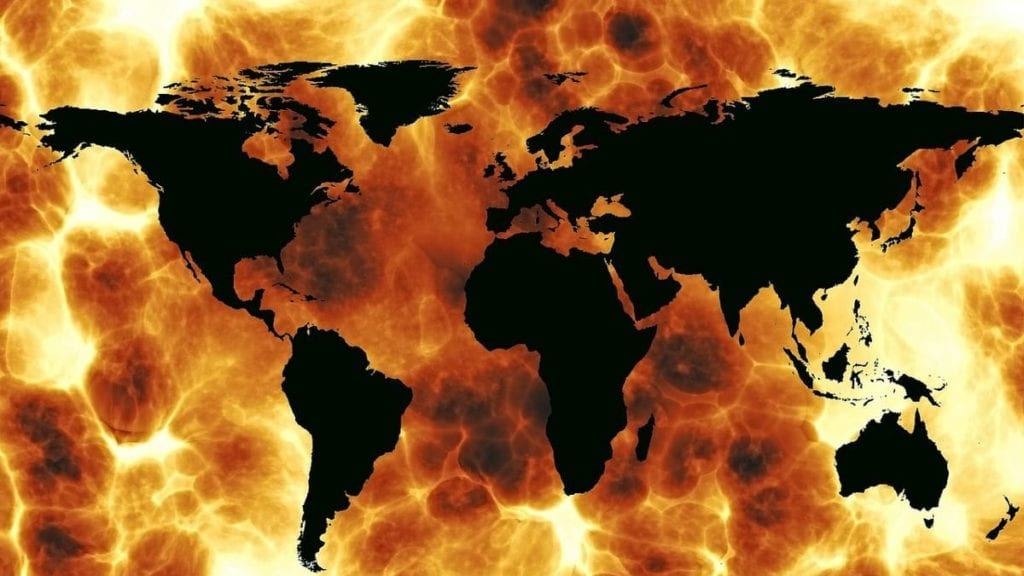 Of all the many frightening things on earth, none compares to the devastation brought on by escalating climate catastrophe.

Record heatwaves, epic cyclones, rising seas, and declining biodiversity bring to mind the most terrible prophecies of religious text. The earth is writhing in torment — around us and within our minds.

Grist for the Feed Mill

One would think — realizing how much devastation we have caused our planet — we would have already changed course.

True, we have made impressive strides. We have less war and poverty to fret and fidget about. Many of the diseases familiar to our grandparents are gone. There are also better prospects for universal education nowadays.

None of these advances, however, addresses the very real problems posed by a surfeit of greenhouse gas emissions.

The hard facts surrounding climate change have become grist for the media feed-mill. Where the weather used to be the background, it has now regularly taken center stage.

We are headed somewhere, but it seems no one really knows where our destination might be.

The Poor and the Vulnerable

In 2010, scientists warned that we were already spewing enough carbon dioxide to raise global temperatures up 1.3 ˚C.

Today, researchers claim we are well on our way to pushing temperatures up by more than 1.5 ˚C — the danger threshold set by the Paris climate accord.

Among humans, the poorest and most vulnerable have paid the utmost price. This includes the 2.5 billion smallholder farmers, herders, and fisheries that depend on nature for food and income.

Researchers claim global warming kills some 150,000 people each year. Most of the casualties are from the most impoverished corners of the world

Meanwhile, vast swaths of land are at risk of becoming uninhabitable. Drought, hurricanes, and landslides have already driven 17.2 million people around the world from their homes.

Things are no better in Davy Jones’ locker. Approximately half of the world’s shallow-water coral reefs are gone. Researchers say another 35 percent could be lost within four decades.

Millions of people around the world depend on these ecosystems for food and livelihood.

Rich countries can work their way out of food shortages. The change in climate patterns might even allow greater harvest and incomes in Canada, parts of Europe, Russia and the United States.

Poorer countries, however, may need help. Officials in the Philippines, for instance, have reported slower growth rates in the volume of rice production and rapidly declining fish harvests.

The government attributes the deterioration to mismanaged — and exhausted — natural resource base. Filipino agriculture officials are quick to point out that climate change is a direct driver.

Many farm and fishing communities in the islands are in peril of wholesale unemployment and hunger.

Undersecretary Ariel Cayanan leads the climate change initiatives of the Philippine Department of Agriculture. He foresees more challenges for the country over the next two decades.

“The consequences of climate change will become more apparent,” Cayanan says. “The country’s urban centers will have expanded while our farmlands will have continued to dwindle and deteriorate.”

The same is true for many countries in West Africa, India, and South Asia.

The U.N. World Food Programme says hunger and child malnutrition could increase by as much as 20 percent by 2050 because of climate change.

Entire species of fauna have in the meantime tumbled into the abyss of extinction. The Yangtze giant softshell turtle is practically gone.

The Spix’s Macaw — a blue parrot native to Brazil— is also believed to have gone extinct in the wild.

The ‘now extinct’ list goes depressingly on, and more creatures appear to be edging toward some kind of brink.

Death in the Ice

The Norwegian Polar Institute recently found the frozen carcasses of around 200 reindeer in Svalbard, an arctic archipelago. The weather was too warm for snow but cold enough so that ice had formed on the ground.

While reindeer are able to dig through thick snow to find vegetation, the ice presented an insurmountable challenge for animals. They died of starvation.

“It is scary to find so many dead animals,” researcher Ønvik Pedersen said. “This is a terrifying example of how climate change affects nature.”

More are on the eve of extinction. Thirty to 50 percent of the planet’s species may be extinct by 2050, according to the Center for Biological Diversity.

We remember what Hemingway taught us: “Never mistake motion for action.”

Yes, we have made some progress toward the development and expansion of renewable energy technologies. International bodies, environmental lobbyists, and even energy giants have made highly publicized moves to slow the advance of global warming.

Yet year after year, the growth of the market for fossil fuels outpaces the development of renewable energy infrastructure. Carbon emissions, in fact, climbed two percent in 2018, faster than any year since 2011, according to a BP report.

The casualties of climate change — human and otherwise — have so far not slowed us down.

We go on using fossil fuel to turn the world into a high-output, revenue-earning machine.  Materials and labor go in, goods and services come out, and traffic inside flows briskly.

By all accounts, we seem to be plunging headlong into the deep, barren midnight we promised to avoid.

How long can we continue along this path?