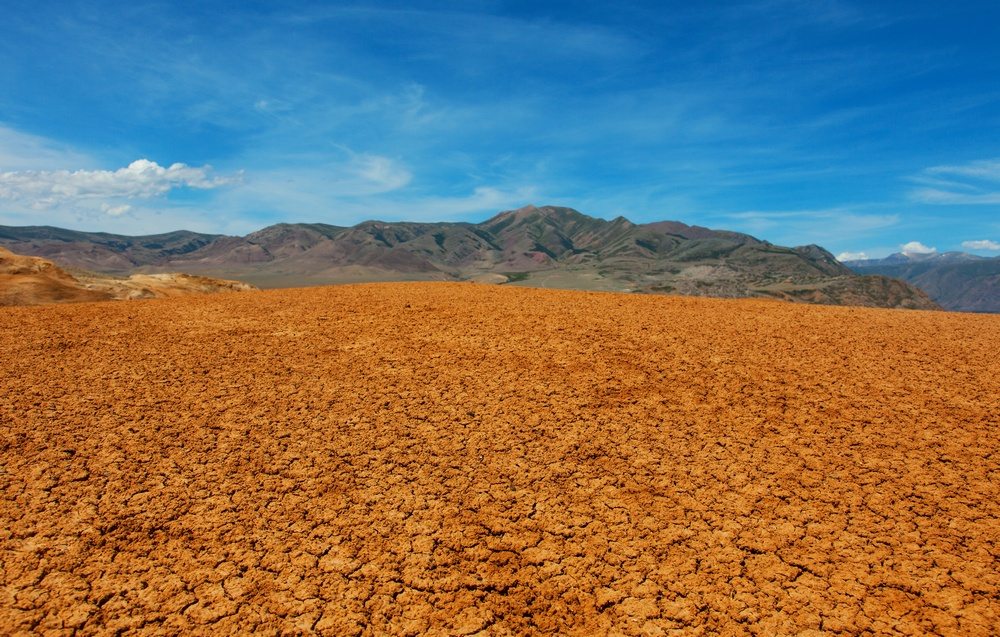 We’re the ones up to our necks in the proverbial!

Now before some genius puts up his hand to state that July, 2015 was actually the hottest month on record – yes, globally – can I point out that the northern hemisphere has a much larger land mass than the southern and that July and August are peak summer in the north? On average, July and August are around 4C hotter than January and February on a global basis. That’s what makes these numbers so damn frightening! You see, July, 2015 was ‘only’ 0.75C warmer than the average. Sure… I’ll wait while you add that to the graph!

October, 2015 was the first month to record an increase of more than 1% above the long term average. November was the same as has been every month since. Who says? NASA, and I have no reason to doubt them.

Australia’s Chief Scientist, Alan Finkel, stated that the February increase is ‘completely unprecedented‘ and that, ‘we are losing the battle‘ against climate change.

“You wouldn’t want to dismiss it. There is genuine reason for concern.” He went on to say that “For all the effort we are putting into trying to avoid increases of emission, we are losing. What we are doing with solar, wind, changing practices, behavioural practices and things like that, we’re not winning the battle.”

Need another viewpoint? Professor Stefan Rahmstorf from the Potsdam Institute of Climate Impact Research is reported as saying that “We are in a kind of climate emergency now. Governments have promised to act (but) they need to do better than what they promised in Paris.”

Time doesn’t worry Earth but it should worry us!

Last December’s COP21 Climate Conference reaffirmed a target aimed at limiting the average increase to 2%. But it’s probably too little, too late!

Writing on his Wunderground blog, meteorologist, Dr. Jeff Masters stated that the February result was “jaw-dropping“, and “an extraordinary margin to beat a monthly world temperature record by,” and “an ominous milestone in our march toward an ever-warmer planet“.

He writes that the world is already 1C warmer than the late nineteenth century, and that heat already stored in the oceans has locked us in to at least another 0.5 degrees of atmospheric warming.

“In short, we are now hurtling at a frightening pace toward the globally agreed maximum of 2.0C warming over pre-industrial levels,” he said.

It’s about the CO2 and mankind’s credit card

If you’re not worried yet, I’ll leave you with one more frightening fact: 2015 saw the biggest yearly jump in global CO2 levels ever measured, according to a report published last week by the US National Oceanic and Atmospheric Administration (NOAA). The annual growth rate of atmospheric carbon dioxide measured at the administration’s Hawaiian Mauna Loa Observatory jumped by 3.05 parts per million, the largest year-on-year increase since measurements began there in 1958.

2015 also turned out to be the fourth consecutive year that CO2 grew by more than 2 ppm! According to Pieter Tans, lead scientist of NOAA’s Global Greenhouse Gas Reference Network, “Carbon dioxide levels are increasing faster than they have in hundreds of thousands of years. It’s explosive compared to natural processes.”

Of course this isn’t the first time in human existence that CO2 levels have risen sharply. However, by way of comparison, the last event occurred between 17,000 and 11,000 years ago. Over those 6,000 years – the equivalent of 75 human generations of today’s life expectation in the first world, CO2 levels increased by a total of 80 ppm. Today’s rate of increase is 200 times faster and it’s accelerating. Right now, the average global atmospheric CO2 level stands at close to 403 ppm. Just 200 years ago atmospheric CO2 was around 280 ppm. That’s a 120 ppm – or 45% – increase in just two and a bit generations!

It seems we’ve been living on our environmental credit card for too long. The interest is compounding faster than we can pay it!

Our environment – the one that provides the food and water that sustains us, has a tipping point. No-one knows what that tipping point is but we do know that as the atmosphere warms, the oceans and the permafrost that covers much of Canada and Russia will give up increasing amounts of methane. Methane is 25 times more efficient at trapping solar radiation than is CO2. As the oceans and permafrost give up methane, the atmosphere warms further, thereby allowing the oceans and permafrost to give up more methane. Don’t try to graph that unless you have a very large bottle of Prozac handy!

Earth is more than capable of recovering from the impact of mankind. She’ll be fine. Different, but fine. The ants and cockroaches (and maybe a few invertebrates) will survive our onslaught and even eventually evolve into sentient beings. Will they look back and wonder how we humans could have been so naive as to pit ourselves against nature?

BTW, if you didn’t get time to graph those temperatures, Stephan Okhuijsen, datagraver.com has done it for you: 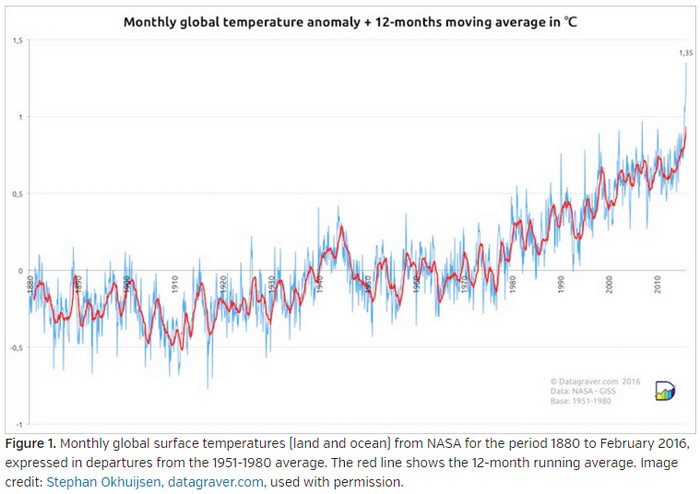 Update:  April 20th, 2016:
March has just broken yet another record!  Globally, the average temperature at 13.92 Celsius was 1.22 degrees above the 20th century average of 12.7C. The news comes from the American National Oceanic and Atmospheric Administration (NOAA).

That makes March the 11th consecutive month in which a monthly global temperature record has been broken. Not a record to get excited about!

In part, the NOAA’s report stated that:

“The string of record-setting months is the longest in its 137 years of record-keeping.” It continued, “Overall, the nine highest monthly temperature departures in the record have all occurred in the past nine months.”

Eastern Brazil, most of eastern and central Africa, the bulk of south-eastern Asia and much of northern and eastern Australia were especially hot while, North-west Canada and northern and western Asia also saw temperatures at least three degrees above the 1981-2010 average. Even Scandinavia felt the heat with a very mild month.

Here in Australia, March was the hottest on record with temperatures sitting 1.7 degrees above the 1961-1990 average.

Ocean temperatures were also on the rise, registering the highest global ocean temperature for March since 1880, and beating out the previous record set just last year.

Still not concerned? Then try digesting this gem, also from the NOAA:

“The seven highest monthly global ocean temperature departures have all occurred in the past seven months.”

To requote what Dr. Jeff Mcmasters said above, ‘heat already stored in the oceans has locked us in to at least another 0.5 degrees of atmospheric warming.’

Unfortunately, it’s time to get that graph paper out again! It turns out that the global April temperature surged past the previous record that was set in 2010. Yet again, the increase has exceeded 1 degree (1.11C to be precise) above the long term average.

Given that the first four months of this year have all set new records, it is extremely probable that 2016 will also steal 2015’s dubious distinction as the hottest year on record. The below GIF, prepared by Ed Hawkins, a climate scientist at the UK’s University of Reading
graphically illustrates the changes in global temperatures over the past 165 years.

May 2016 will also go down as the month when atmospheric levels of CO2 also exceeded 400 ppm in the deep south.  The other two global monitoring stations, in Hawaii and Alaska, passed that milestone in 2012 but, up until 2015, had managed to slip back under 400 ppm each spring. Paul Krummel, lead scientist of the CSIRO team analysing data from Cape Grim, stated that:

“[the CO2 levels] highlight the problem of rising emissions, which are increasing more rapidly than they used to be”. He went on to say that, “[CO2 levels are] “not going to go back below 400 ppm for a very long time unless we get very good at mitigation.”

The following chart shows CO2 levels over the past 2,000 years.

Now overlay that with the change on global population over the same period:

Got an opinion? Why not ‘get it off your chest’ now. Soon it may be too late!

PrevPrevious PostLife on the go… from school bus to a truly mobile tiny home!
Next2015 ‘shattered’ global temperature records!Next